The Victorian London from Sketches by Boz: The Occupations

Last week we have amused ourselves on several outing places back in 19th century’s Victorian era in London. I hope you enjoyed it! Today, together with Boz, I’d like to introduce you to some interesting people from that era. If you happened to live at that time in London, you would certainly meet these people quite often. They are people who provided services for your family and daily household, but maybe…just maybe..some of them don’t get much appreciation from the society at that time. So, right on this Victorian Celebration, why don’t we get to know some of them? Let’s leave whatever you are doing right now behind you, and just imagine yourself as someone who lived in London on 19th century… After you ladies and gentlemen… J

Note: These are the occupations which appeared quite often in Dickens’ Sketches by Boz. Of course there are many other unique occupations that existed in Victorian era, but I limited my post only with them who are described in the book, and which I found quite interesting.

Coachman
As we all know, a coachman is the driver of a horse-drawn coach. Driving them was a special skill, and the driver of them played an important role in the society of the time. The coachman had a specialized skill set, not unlike the modern taxi or bus driver. He had an unusual position in society because of his important role in commerce, travel, and even mail delivery, often working directly with the rich upper classes despite coming from an impoverished, uneducated background. Some coachmen took pride in the speed of their service, and carriage racing remains a sport to this day. [source] 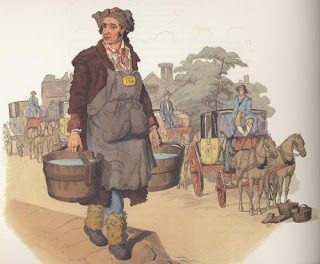 Waterman is one of the workers you would find in a hackney coach stand, an occupation you can found on the early 19th century. Public houses are kept open during the night for the accommodation of the coachmen.  The figure represented upon this plate is employed as waterman to the stand, who is licensed, and wears a badge with his number engraved thereon: his business is to feed and water the horses, and to open the door for the passengers, that the driver may remain upon his box: he also has charge of the coaches during the time that the coachmen take their meals. [source] 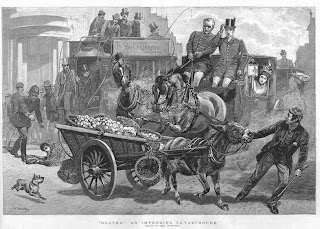 Costermonger, or simply Coster, is a street seller of fruit (apples, etc.) and vegetables, in London and other British towns. They were ubiquitous in mid-Victorian England, and some are still found in markets. As usual with street-sellers, they would use a loud sing-song cry or chant to attract attention. Their cart might be stationary at a market stall, or mobile (horse-drawn or wheelbarrow). Costers met a need for rapid food distribution from the central markets (e.g., Spitalfields for fruit and vegetables, Billingsgate for fish). Their membership as a coster was signalled by their large neckerchief, known as a kingsman, tied round their necks. [wiki]

A chimney sweep is a worker who clears ash and soot from chimneys. It was a job children could do better than adults, thus most of chimney sweepers are children. Children as young as four years old were sold to master chimney sweeps most often by orphanages but sometimes by their own families. The children would do the work in exchange for learning a trade and being housed and fed. All the money the children earned was turned over to the master sweeper. Tales of mistreatment abounded and the children often begged for food from the customers they served. 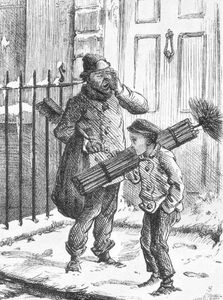 A chimney sweep was required to climb up the inside of the chimney, sweeping and scraping soot into a bag. The tight spaces occasionally caused the sweeps to become stuck. A chimney in poor condition might cause the sweep to lose a grip or footing and fall to his death. Another hazard of the job was the illness caused by inhaling the soot. [ehow].

Chimney sweepers were often linked with The 1st of May event. They usually perform the dancing.

Beadle, sometimes spelled "bedel," is a lay official of a church or synagogue who may usher, keep order, make reports, and assist in religious functions; or a minor official who carries out various civil, educational, or ceremonial duties. Dickens emphasized the important role of a parish beadle at that time in Sketches by Boz [chapter 1 of 'Our Parish']: "The parish beadle is one of the most, perhaps the most, important member of the local administration. He is not so well off as the churchwardens, certainly, nor is he so learned as the vestry-clerk, nor does he order things quite so much his own way as either of them. But his power is very great, notwithstanding; and the dignity of his office is never impaired by the absence of efforts on his part to maintain it."

If you have already read Oliver Twist, you might remember the character of Mr. Bumble who took Oliver to the working house. Mr. Bumble was a parish beadle.

A clergyman in the Church of England who is employed to perform divine service in the place of the incumbent, parson or vicar. He must be licensed by fixed estate in the curacy, he may be removed at pleasure. But some curates are perpetual. [source]

So, ladies and gentlemen, we have reached the end of our journey in Victorian London of today. Permit me to order a coach for each one of you, to bring you back to the present. However, before we part, I have the pleasure to remind you that you are invited to our (Boz and I J) journey of next week. We are going to go down the streets and shops of Victorian London. Until we meet again…. J

P.S. If you happened to miss our outing last week, you can still join me and Boz in Victorian London Amusements.

Posted by Fanda Classiclit at 7:20 AM