It's the last scene from this chapter...

"The fresh morning air seemed to drive away all his sombre passions. He thought only of Sibyl. A faint echo of his love comes back to him. He repeated her name over and over again. The birds that were singing in the dew-drenched garden seemed to be telling the flowers about her." 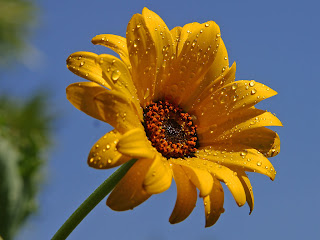 Have I mentioned before that I LOVE nature scene like this? I love flowers and birds, and love Wilde's idea about the birds telling the flowers about the woman one loves. Oh, if only it were for a romantic love story...

That night Sibyl would play Juliet, and Dorian had proudly invited Basil and Lord Henry to watch the genius actress who would become his wife. However, Sibyl's performance that night was surprisingly very bad. Dorian became very angry to her, although Sibyl had explained that it is because of her great love to Dorian, that she could no longer acted as somebody else. In Dorian had she found herself, her life, her happiness.

Dorian could not accept that, he coldly broke their engagement in a cruel manner, despite of Sibyl's cry and weep. Then that night, at his bedroom, Dorian found that his picture--painted by Basil--has changed! There was a cruelty on his expression. Could that be possible, that the picture reflected the soul of its subject? Dorian directly realised that the picture reflected what he had done to Sibyl! He would apologize to her the next day, and before that, he put a screen in front of the picture to hide it.

Her acting, not herself
To whom Dorian had fell in love? To Sibyl? NO. He fell in love to what she performed, to her acting. This is pathetic!

Fear, not love
I doubt that Dorian really felt sorry for what he had done to Sibyl. I mean, he was sorry, but not for Sibyl; Dorian felt sorry because he was scared that his soul would change just like the painting. Why? Read next...

Battle between good and evil
I think the painting alteration was representing the moment when the evil begin to creep into our soul. We are basically good, because God has made us good. When evil is penetrating our soul, it's just as when Lord Henry began poisoning Dorian. We know we had done sin, we know we shouldn't do that, we can see the dark evil that came in our way, and we are scared that evil will take us away from where we were supposed to belong from the beginning (God). At this point, we are struggling, just as Dorian was at that night. We can see it clearly from his mind wandering:

"...And, yet, a feeling of infinite regret came over him... He remembered with what callousness he watched her. Why had he been made like that?.."


"...Lord Henry knew what women were. Why should he trouble about Sibyl Vane? She was nothing to him now..."


"...He would not see Lord Henry any more.. He would go back to Sibyl Vane, marry her, try to love her again... Poor child! He had been selfish and cruel to her..."

That's what happened when we committed a crime or sin, our soul are always struggling and weighing, we can never be at peace; and which part is gonna win? It depends on us; and in this story, it depends on where Oscar Wilde will take us next...

Posted by Fanda Classiclit at 8:25 AM