Simon Tuggs on Sketches by Boz 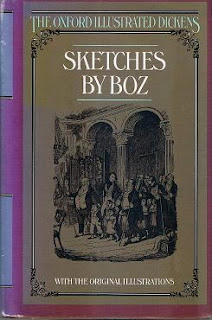 Being some kind of short stories collection, it is difficult to pick an interesting character from this Sketches By Boz. I usually like characters that are experiencing character switch within the story, which is impossible to find in a short story. However, I’ll try to discuss about a character which appeared in 20 pages of chapter IV in ‘Tales’ section.

This is what Dickens described about a young man named Mr. Simon Tuggs:

“He was as differently formed in body, as he was differently constituted in mind, of the remainder of his family. There was that elongation in his thoughtful face, and that tendency to weakness in his interesting legs, which tell so forcibly of a great mind and romantic disposition.”

Frankly speaking, I didn’t quite get in the plot very well, but from what I gathered, Simon is a son of a grocer who had just possessed twenty thousand pounds from a will. The family didn’t take any longer to close the grocery and moved to Ramsgate. On the ship to Ramsgate, the family got acquainted with a couple: Captain Masters and Mrs. Belinda Masters. Shortly enough, Simon found himself attracted to Belinda, who seemed to return the feeling, despite of her marriage with Captain Masters. And after six week being together, Simon fell in love with Belinda, a feeling that they both called “platonic love”.

From Dickens’ description, I can see that Simon is physically weak and emotionally romantic. When the solicitor announced that the Tuggs had won the will, Simon fainted twice (the sign of weakness). And seeing how quickly he became attached to Belinda, only showed that he is a romantic person. It seems from this story, that weakness and romanticism are not a perfect combination, actually it’s a dangerous combination. Add a large sum of money (remember what the Tuggses just got from the will?) in it, and bad people can use someone like Simon.
Posted by Fanda Classiclit at 7:00 AM