The third chapter of The Picture of Dorian Gray turned out to be not so full of idea as the first two chapters. Yet, it's still interesting!

Nothing impressed me in this chapter, but I kept imagining Lord Henry’s appearance through this chapter. So, I browsed the internet and found one of the actors who had been performing Lord Henry, do you think he reflected his character? I haven’t watched the movie… 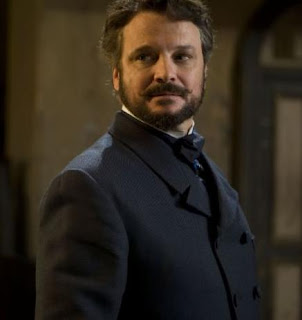 It's mainly contained of conversations from the part of Lord Henry. From his interview with his uncle, it's revealed that Dorian Gray was the grandson of a wealthy Lord Kelso, who had a very beautiful daughter—Dorian's mother—Margaret. The young woman strangely picked a poor man as her husband. Her father detested his son-in-law, he then paid someone to make his son-in-law killed. One year later little Dorian Gray entered the world as beautiful as his late mother who soon died. Dorian grew up under the power of his grandfather.

The devil's identity revealed!
On chapter III, Lord Henry purpose of influencing Dorian became transparent. He deliberately dominated Dorian's mind and soul. I think he was the real devil who was happy to capture a poor soul he could reshape for his own pleasure. L

Between Basil, Dorian Gray and Lord Henry
I just realized one thing. Basil had surrendered himself in the domination of Dorian Gray, without any consciousness from the latter; while at the same time Lord Henry had also captivated Dorian Gray into his power without the victim's consciousness. Isn't that interesting?

Are you wiser?
At the lunch at Lady Agatha's, Lord Henry also talked about the secret of being young (again). It is by making the same follies as we did when we were young; a dangerous suggestion which, of course, fascinated young Dorian just more. I think Wilde would like to remind those who praised youthfulness, that life has its own stages, and that is the most natural process. We made mistakes, and learned from them to be better in the next stage. Only stupid and unwise people who wants to get back to their past, doing things that they know was a mistake. And to me, people who keep doing the same mistakes are they who never grow old (maybe older in age, but not in mind). So, again, people who worship beauty and youthfulness are brainless (just like Lord Henry said before).

The conversation about American people—especially women—whom they believed had endangered the 'territory' of English women (in the context of marriages). I don't get what Wilde wanted to speak to us in this conversation. Was it really the common social problem at that era? It was certain however, that English people seemed to underrate American.

Here the characters were not developed so much, so I will skip this to next chapter!