"It was a marvellous spotted thing, as effective as the seven deadly sins." 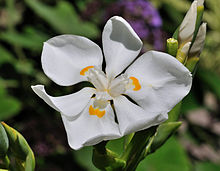 It's a fine specimen of orchid called Robinsoniana. Lord Henry had cut it to be placed in his buttonhole.

With a burdened soul, Dorian took a hansom to the slum area of London, where people like him found 'heaven' in opium dens. There a woman recognized him as the 'Prince Charming', the nickname Sibyl Vane used to call him. Unfortunately James Vane—who at the same time was somewhere near the den—heard it and tried to kill Dorian to take revenge for his sister. However Dorian used his immortal youthfulness as an alibi (as Sibyl’s death was already 18 years ago but Dorian’s appearance was seemed to be in the twenties), and escaped the murder attempt.

Dorian held a tea party and invited several dukes, duchess, including Lord Henry. Oscar Wilde offered smart and interesting debate here, especially between Lord Henry and his cousin Gladys. And at the end of this chapter Dorian fainted at his own conservatory, because to his horror, he had seen the pale face of James Vane behind the window...

Several interesting quotes from Lord Henry, that after thinking about it, there’s truth there…

"Like all good reputations, every effect that one produces gives one an enemy. To be popular one must be a mediocrity."

"Scepticism is the beginning of Faith."

"We can have in life but one great experience at best, and the secret of life is to reproduce that experience as often as possible."

Note:
This would be my last chapter post for The Picture of Dorian Gray, I would conclude all after finishing the third last chapters, and will post my review as a wrap-up post.

Posted by Fanda Classiclit at 1:30 PM