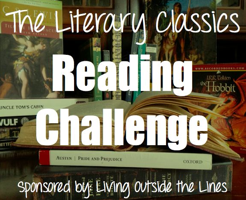 I know, I’m a challenge-addicted! I don’t even calculate anymore how many challenges I’ve joined this year. But (here’s my self-defense J) if I can combine several challenges with each other, then why not? I don’t have to read more than what I have planned to, but at the same time I get excited with each challenge. So..here’s my new reading challenge, which I can combine with The Classics Club Project and A Victorian Challenge—which has just begun (and several other challenges of course..): The Literary Classics ReadingChallenge. The task is to read classics throughout the year (1st June 2012 – 31st May 2013), we are free to make our own list and our target in number of books we’d like to read, quite easy, isn’t it? J. So…this is my list. It’s not a fixed list, I might change the schedule or the books, but I make a commitment to read at least 24 classics until May 2013.

December
A Tree Grows in Brooklyn

May
The Man Who Was Thursday – G.K. Chesterton
David Copperfield – Charles Dickens

Hmmm…I just realized that I have put four Dickens for a year! Well, I just love how he writes and have planned to read all of his works, so why not? Actually I’m an organized person, so I like to schedule my readings for the next months. That way I always have a book to read after I finish ones (and don’t have to sort from my huge pile J). If I want to read other than the list, I would just revise or re-schedule it. This challenge really helps me to set a list for the whole year, thanks to Ali!

What about you? Come and join me in the challenge!

Posted by Fanda Classiclit at 9:31 AM